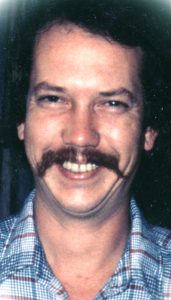 He was born in Los Angeles, on March 19, 1955, but later moved with his family to East Texas, where he laid his roots. It was here Stephen attended Imperial School in Big Sandy and went on to Stephen F. Austin University. Despite the distance, Stephen always made the effort to arrive in Pikeville, Tennessee, every Thanksgiving to break bread with his sister Theresa, Uncle Mark and Aunt Margaret and spend time chasing around the lawn with his niece and nephew.

Steve was never without one of two things, his dogs or a good book. These staples in many ways define who he was, compassionate to a fault and insatiably curious. He worked hard for years in the Chrome Plating Machinery Fabrication industry, but never forgetting the important things in life like taking time off to go fishing with his best friend of over 30 years, Bob Garza, or hanging up his coat to go golfing and bowl with co-workers.

A private burial service will be held at 10:00 a.m., Saturday, September 8, 2018, at the Pikeville Cemetery, for immediate family.

Online condolences can be made at reedfamilyfh.com or emailed to heggie.2@hotmail.com or by mail to Theresa Hegvold Fenton, 5261 Wellsley Bend, Alpharetta, Georgia 30005.

The family welcomes flowers or a donation to the Longview Animal Care & Adoption Center (903-297-7387), in honor of Steve’s dogs Winnie, Buckskin, Midnight and Lady whom he loved so much.

Theresa Hegvold Fenton and her children would sincerely like to thank everyone who remembered Stephen during his illness, particularly the notes of encouragement sent to Stephen and to his family following his passing.

Arrangements are by Putnam-Reed Funeral Home in Pikeville.