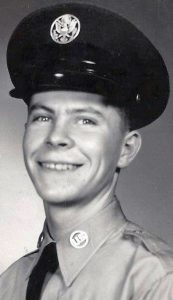 Elton Leroy Ferguson ‘Fergie’ went home to be with the Lord at the age of 83, after a brief but valiant struggle with cancer, on Wednesday, November 29, 2017, peacefully at his home in Cocoa, Florida, surrounded by his family.

He was born May 3, 1934 in Pikeville, Tennessee where he resided for 23 years before moving to Florida.

He served in the Korean Conflict as a jet aircraft mechanic in the Air Force. He was stationed in Iceland for a large portion of his enlistment.

He spent a short amount of time as a taxi cab driver, and 25 years as a carpenter, before starting his own land clearing business that he operated for 20 years. He retired to enjoy fishing, air boating, tinkering with motors, hobby woodworking, and spending time with his grandchildren

A Celebration of Life will be held at a future date.

He will be laid to rest at Blackburn Cemetery in Pikeville.

Online condolences made be made at http://www.funeralsolutions.net.

Arrangements were by Funeral Solutions.