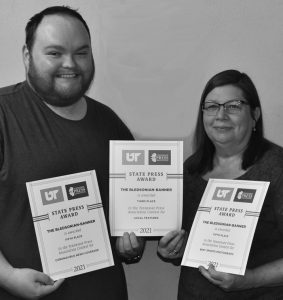 The local newspaper received a third place showing in the Local Features category, announced Publisher Sandy Dodson. The three featured articles included a story written by Chase Smith about a Bledsoe County graduate being accepted into Harvard entitled “White works hard;” plus two features by Sandy Dodson including one about Martha Sue Brown turning 100 years old entitled “Living a simple, humble life” and the other about two dogs living in the city that were rehomed to the country, “From street life to country living.”

For more see the September 2 issue of The Bledsonian Banner.