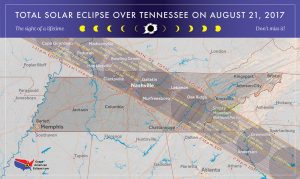 The moon’s shadow will be traveling at a pace of 2,100 miles per hour and reach the grounds of the State Capitol in Nashville at around 1:27 p.m., staying in totality for nearly two minutes.

The eclipse will reach Downtown Pikeville, which is in the line of totality according to NASA maps, at around 1:31 p.m. and last around two minutes and 20 seconds.

See where to view and how to stay safe in this week’s edition of The Bledsonian-Banner.