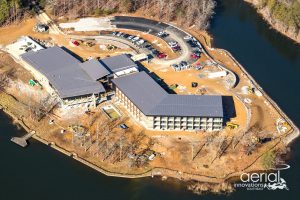 The rebuild of the Inn at Fall Creek Falls State Park is on schedule, according to Communications Director David Roberson with the Tennessee Department of General Services. Construction of the new inn, that was demolished the later part of 2018, is expected to be completed this fall after years-long work on the site and construction started in January 2019.

Roberson said the estimated completion date is the fall of 2021 and all major milestones have been met by the contractor thus far.

“We are excited about the progress of the new Lodge at Fall Creek Falls and look forward to its opening later this year,” said Keith Pyle, president of BELL Construction, the project’s general contractor. “We’re proud to have contributed to many of the state’s iconic landmarks, including this exciting new resort facility at Tennessee’s premier state park – one of the most scenic outdoor recreation areas in the country. Our team, along with Earl Swensson Associates, the project’s designer, is so pleased to help bring the state’s vision to life.”

For more see the January 14 issue of The Bledsonian Banner.