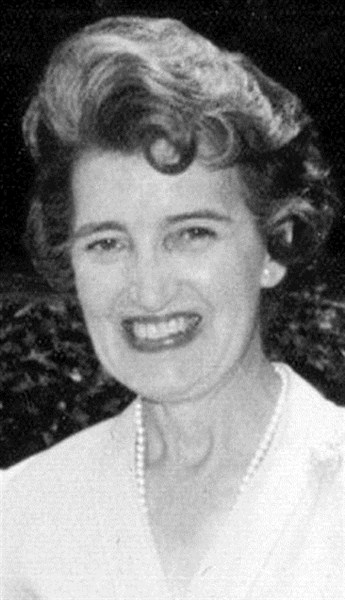 Mary Beth Montgomery died at home after a brief illness on Wednesday, July 3, 2013. Her world was her family in which she included all her relatives, many friends and just about anyone named George. She delighted in being a grandmother and great-grandmother to both her immediate family and a large extended family.

She was born on April 21 to Albert Bush and Anna Christine Taylor Cranwell in Pikeville and in many respects Pikeville remained her home until the day she died. She was the youngest of five siblings, all of whom rarely called her anything but “Baby.”

She was a graduate of Bledsoe County High School, Stevens College and the University of Tennessee. At Stevens, she made a lifelong friend of Betty Wood Hogeboom and they shared the love of their granddaughter Erynn Montgomery Scollard and great-granddaughter Mary Beth Scollard.

At the University, she met a gregarious young law student, George Donaldson Montgomery. The meeting led to a romance generously facilitated by a fellow law student and friend of George’s who would loan him his car for their dates. George and Mary Beth married in 1942 in Pikeville. They had one son, George Cranwell Montgomery.

During the war, with George in the newly founded FBI and then in the Army Air Corps, they honeymooned wherever they were sent. It was an exciting time as newlyweds, moving every few months around the country. Mary Beth loved recalling stories about the different places they lived and the many boarding houses and landladies they had.

At the end of the war, they returned to Knoxville where Mary Beth became an ardent bridge player and a determined gardener. She was an active civic leader, serving as president of both the Junior League of Knoxville and the Knoxville Garden Club and as a member of the Board of Directors of the Blount Mansion Association. She was, as well, a generous supporter of the University and other civic organizations. Mary Beth was an active member of Second Presbyterian Church which she started attending while at UT.

In these latter days, there have been many expressions of care and affection. There has been one hero: her niece, Ann Cranwell, who has been her boon companion and always a welcome presence. Since Mary Beth’s health began to decline, she has been indispensable.

A Memorial Service and reception was held on July 9 at Second Presbyterian Church.