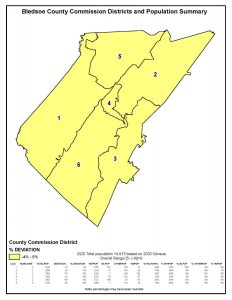 The Bledsoe County Commission’s Reapportionment Committee met Monday, August 16, in its first session after redistricting data from the 2020 Census was released.

The Census (see separate article) put the County’s population at 14,913, including 2,284 offenders being housed at Bledsoe County Correctional Complex. Districts are redrawn every decade to reflect shifts in population throughout the county.

For more see the August 26 issue of The Bledsonian Banner.