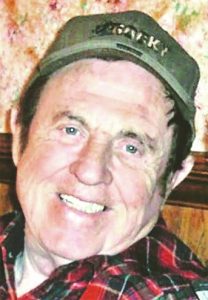 Chester Adam Clayborn, of Pikeville, born September 4, 1933 in Jamestown, Tennessee, passed away on Tuesday, December 10, 2019 quietly at his home.

Chester and Rita married in 1954 and he served in Iceland during the Korean War. He graduated from Tennessee Tech and received two masters degrees after moving to Atlanta. He served in the Atlanta School System as a teacher, counselor and principal. After Chester retired, he and Rita moved back to Tennessee surrounded by his beloved mountains near the Cumberland Plateau. Chester attended the Cumberland Homestead Baptist Church. To Chester, family was everything next to his faith in God above. He was loved by everyone who met him and his friendly personality brightened many lives.

He is preceded in death by his Parents, Mack and Lettie Clayborn; granddaughter, Jessica Arrendale and several siblings.

Funeral services were held Saturday, December 14, at 1:00 p.m. at the funeral home chapel. Burial followed in the Fentress Memorial Gardens with a Military Service at graveside provided by American Legion Post 137.

Jennings Funeral Homes in Jamestown in charge of services.