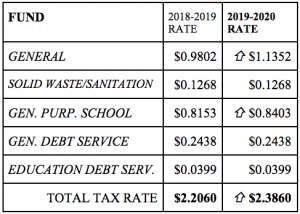 The Bledsoe County Commission voted 8-4 in favor of raising property taxes 18-cents at a recessed meeting on Tuesday, August 6.

Commissioner Matt Colvard made the motion to accept the 18-cent tax increase, with an amendment that added back in money from previous 8-percent cuts in donations to charitable organizations such as Fire Departments and the Bledsoe County Rescue Squad.

The move stops the fund balance from depleting by nearly a half-million dollars as the originally passed budget would have done—instead depleting it by around $150,000.

For a full report of the meeting, see the August 15 issue of The Bledsonian-Banner.