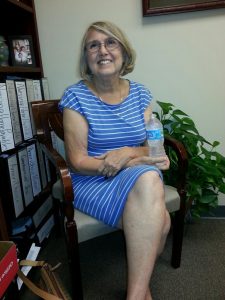 Sue Lewis Hailey, 70, lost her battle with Cancer on March 26, 2019, while in Hospice Care at Germantown Methodist Hospital in Memphis, Tennessee.

She was born in Pikeville to the late Envoy (PeeWee) Lewis and Kathleen Gass Lewis.

She attended elementary school at Patton School in the Melvin Community; when it closed she then transferred to Pikeville Elementary School. After the death of her “MaMa” Lewis, she moved to Chattanooga in 1963 to live with her Aunt Allene and Uncle Cecil Kendall where she attended Brainerd Middle School and graduated from Brainerd High School in 1967. She moved to Memphis and on August 30, 1979 she married Duane Hailey. She was employed for many years with Shelby County where she was the business office manager in the accounting department at the Oakville Healthcare Center.

She loved working in her yard, especially with her flowers and also loved animals (cats always gravitated to her house it seemed). She was very involved in her son, David’s sports activities and had a special love for her son’s dog, Hank. Sue always had a smile on her face, enjoyed visiting with her neighbors, attending concerts with her friends, and maintained her sense of humor despite her ongoing battle with Cancer.

She was buried in the Marked Tree Cemetery in Marked Tree, Arkansas. A Celebration of Life was held on April 14 at the Memphis Botanical Gardens in Memphis.

A Memorial Service will also be held in the Melvin Community in Pikeville on April 27 at the Faith Baptist Fellowship Hall, beginning at 11:00 a.m. At that time please share your thoughts and special memories of Sue.