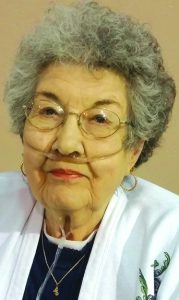 Joanne was born March 21, 1930 in Eugene, Oregon and grew up on the McKenzie River in Oregon. She graduated from McKenzie High School in 1948 where she was a champion volleyball player and captain of her team. During her life she was a telephone operator, waitress, and an inspector at Oster.

A memorial service will be 3:00 p.m. Sunday, March 3, at First Baptist Church in Pikeville. Bro. Jimmy Williams will be officiating. The family request no flowers but memorial contributions be made in her honor to the charity of your choice.