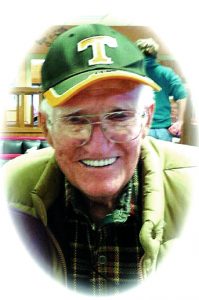 Irvin was born in Thomas, Oklahoma and was nine when the family moved to Iowa City, Iowa. In 1951, he joined the Air Force and served for six years. During three of those years, he was stationed in Casa Blanca during the Korean war. He had the opportunity to play pitcher for the Air Force team and toured through Europe with them until he sustained an injury.

In 1952, he met and married Barbara Jean Brown (who preceded him in death in 2015). They have three children: Jay (Lori) Detweiler, Linda (Kenney) Rogers, and Jeffrey (Carol) Detweiler.

Barbara Jean made a confession of faith as a child, but Irvin didn’t until he was 42! One summer he drove the kids to a Vacation Bible School and waited in the parked car until the very last day when Linda begged him to go inside to watch her get an award. She knew they were giving the Gospel that night and she really wanted her Dad to hear. Praise the Lord! He walked forward to be saved.

He never had the opportunity to finish elementary school, but that didn’t stop him from going to Lynchburg Bible College for a two-year ministry degree. At age 56, he began to pastor a church for the first time. He was sorrowful he missed so much time on knowing Jesus and he was excited to share Christ with others.

He was a carpenter by trade and was very good at his craft. He could even draw his own blueprints. He made a living building and selling houses. He could figure anything out, like plumbing and small engines.

Irvin had a love for life and being active. He enjoyed any sport, but he particularly loved golf, fishing and horseshoes. He always had a joke ready and waiting and had someone chuckling, even if it was just himself. But, his greatest desire wasn’t to make people laugh but to see them saved.

Irvin Detweiler attended Calvary Freewill Baptist Church (Pastor Darvin Oakes) for the past 10+ years and has greatly appreciated their care and love.  He’s loved every minute spent with his fishing and golfing buddies. He appreciated his good neighbor Buford for watchin’ out for him the last few years. He struck gold when he had his daughter, for she has faithfully cared for both of her parents in their old age.

Although he lived life to the fullest, this world was not his home and he is happily in the arms of his Savior.

Funeral services were held Sunday, September 23, at 3:00 p.m. in the funeral home chapel. Burial was in Seals Cemetery.