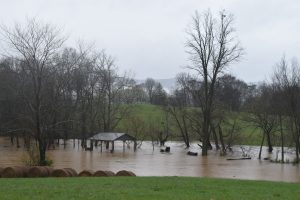 This pole barn has been engulfed by the Sequatchie River off of Upper East Valley Road.

Nearly four inches of rain have fallen over the past 48 hours, according to local Volunteer National Weather Service (NWS) Observer Roy Lee Standefer.

The heavy rain has led to roads becoming impassible and caused Bledsoe County Schools to close on Thursday, March 1.

The Bledsoe County Rescue Squad has its SwiftWater Rescue Team on standby and urges drivers to use caution.

A flood warning for the Sequatchie River is in effect through Saturday afternoon, according to the NWS in Morristown. The NWS advises motorists to “Turn Around, Don’t Drown!”

For more, see the March 8 issue of The Bledsonian-Banner.