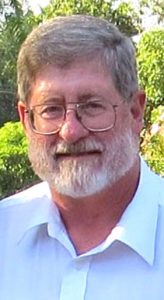 Larry Gene Banks of Spencer passed away on Tuesday, November 7, 2017. He was born in Phoenix, Arizona in 1950 to Henry and Mae Dell Banks. His family moved to Prescott, Arizona when Larry was in elementary school where he preferred books and technical articles to sports. As a child, he built his own toys and a small steam engine, progressing to building his first dune buggy. In high school and later at the University of Arizona in Tucson where he studied engineering, he was involved in the local school TV network as a technical director in local programming and later as a technical director at a Tucson TV station.

After college, he enlisted in the Army and went to radar school. While at his first post in New Mexico at the White Sands Missile Range, Larry earned his pilot’s license and later became a flight instructor. He lived in Rhode Island for a time, and then Naples, Italy where he accepted a job in communications with the US government which took him to Kenya, Togo, and many other countries in eastern Africa over the next few years.

Larry met his wife, Kim Morgan when he returned to the US to work in Albany, Georgia. Soon after their marriage, Larry was assigned to Vienna, Austria where his work involved setting up secured communications networks in Eastern Europe and Russia. Eventually Larry and Kim returned to work in Washington DC, and there they purchased a small farm in Nokesville, Virginia, preferring country life. Their pastoral life was interrupted when Larry had a one-year tour in Moscow where he worked setting up communications at the new US embassy.

Throughout his service for the federal government in Europe and in Russia, Larry nurtured his love of aviation, flying with local clubs. After retiring from federal service, Larry was able to devote himself to his part-time career as a pilot and flight instructor. Larry and Kim bought their farm in Spencer, Tennessee, and built their goat dairy together.

Larry has always been active in his church, Mt. Crest United Methodist, where he served as a speaker, Sunday School and Bible study teacher. He also served as past president of the local Gideons.

Larry is preceded in death by his father, Henry; mother, Mae Dell, and older brother Duane, who died in the Vietnam war.

He is survived by his wife, Kimberly Banks, of Spencer; his brother, David, and wife, Carolyn, of Santa Paula, California; and his niece Andrea, and husband, Robert, and their two sons, Sean and Patrick of Los Angeles, California.

A memorial service will be held at the Mt. Crest United Methodist Church in Pikeville on Saturday, November 18, 2017 at 2:00 p.m. In lieu of flowers, donations may be made to the Larry Banks Memorial Fund at First Farmers and Commercial Bank, 441 East Spring Street. Pikeville, Tennessee 37367. (423) 447-2931.