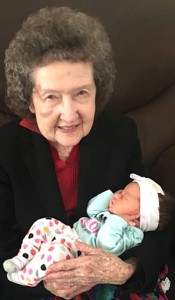 Thelma Mae Miller, affectionately known as “Cricket,” 92, of Pikeville, went home to be with the Lord on Saturday, January 14, 2017. She worked several years with the Bledsoe County School System as a cafeteria worker. Thelma was a member and attended the Cold Springs First Baptist Church and encouraged all her family to be strong in their faith. She was born and lived most of her life in Pikeville but also lived in Albuquerque and Oklahoma. Preceding Thelma in death was her first husband of 43 years, Kermit Miller; and second husband of six years, Clifford Miller; parents, James and Cleasy Hall Sullivan; brothers, Howard, Buford, Connard and Harold Sullivan; sister, Marie Dodson; and great-grandson Kainen Boring. Left to cherish Thelma’s memories are her children, Linda (Scotty) Sutherland of Cookeville; Donald (Delores) Miller of Albuquerque, New Mexico, Pete (Ellen) Miller of Evensville, Nancy (Ed) Lewis of Dunlap, and Eric (Luann) Miller of Pikeville; sister, Nell Morgan of Kingsport; ten grandchildren; 19 great-grandchildren; three great-great-grandchildren; several nieces, nephews, and cousins, and a host of friends. The picture represents the oldest and youngest member of this family. A Celebration of Thelma’s Life begins at 1:00 p.m. on Thursday, January 19 in the funeral home chapel with Bro. Doyle Ashburn officiating. Burial will be in McDowell Cemetery. The family will receive friends Wednesday evening, and 11:00 a.m. until service time Thursday. Condolences can be made at www.pikevillefuneralhome.com. Pikeville Funeral Home was entrusted with arrangements.Thel